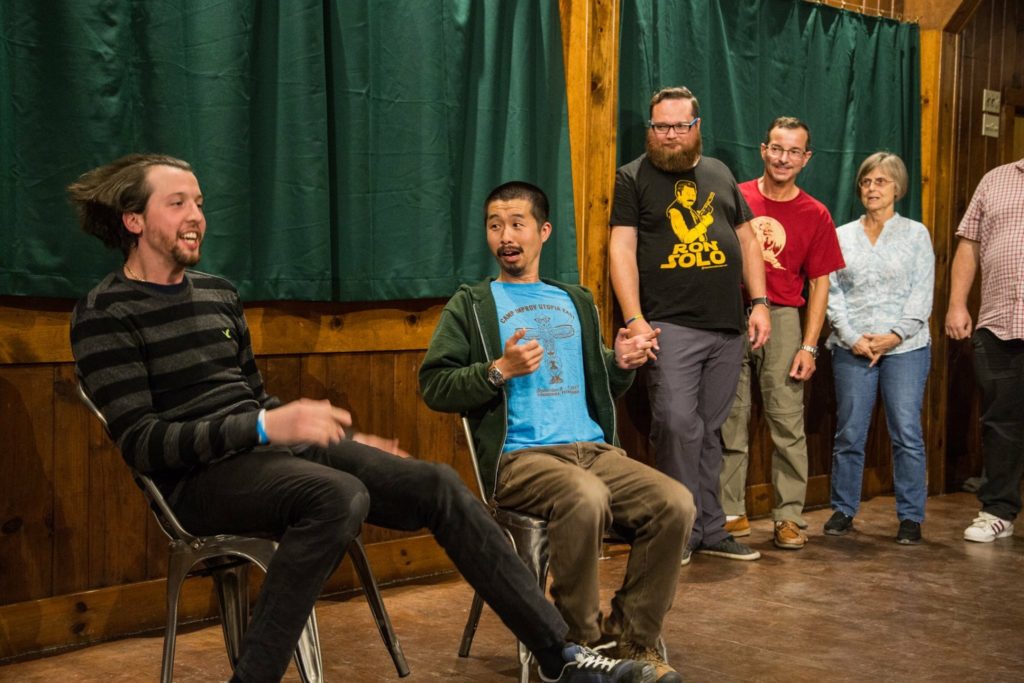 Camp Improv Utopia East was such an amazing experience last year that I couldn’t wait to come back. I met some wonderful people, took workshops with great teachers, and kayaked around Trout Lake.

One year later, I was dreading my return. I was about to be surrounded by much more experienced improvisers and take workshops from famous teachers like Armando Diaz, but I had done very little improv in the past 12 months. I’d moved to Athens, Georgia for graduate school, a town famous for its music but not for its improv. I tried to make it work, doing solo exercises in my room, practicing with a student group a handful of times, and traveling to Chicago for a week-long intensive, but averaged out over the year I hadn’t done much. As camp got closer, I was even having trouble thinking of simple character choices. I haven’t had been this in my head since I started improv.

Camp arrived and I was fine on the first night. I was happy seeing and hugging all my fellow campers, taking their pictures with my camera, and not thinking about performing. Then Saturday morning arrived and I had my first workshop with Josh Nicols about using our environment. He explained how we can initiate with physicality and object work, and use it to explore our characters. “The first line is not said,” he told us. After some warmups, the scene work began. Two-by-two, my fellow campers volunteered, initiated scenes with object work and physicality. In one scene, a character struggled with his clown costume, and in another scene two characters expressed their emotions through the rubber band ball that they were building. Everyone was physical and funny, and I laughed from the safety of my seat.

Finally, I was one of the last ones left. I got up in front of the room, joined by a scene partner. I was literally telling myself to “stay calm” as Josh asked for a suggestion to start us off. Someone suggested “journey,” and I didn’t know what to say about journeys. “The first line is not said.” Without much thought, I initiated an attraction in my scene partner’s character, but I hadn’t said anything yet! I was surprised, both by the specific choice I made and how much easier it was to initiate. Josh gave me some needed side coaching about halfway through the scene, but I wasn’t so stressed anymore. I was having fun again.

After the first workshop, I took my 2nd annual kayak trip around the lake. As I paddled, I stared into the water, noticed the rocks and mussels, and watched water droplets slide off my paddle. I was in the moment. Like improv, I’ve done very little kayaking in the past year, except I wasn’t anxious about it. I’m not an experienced kayaker, but I’ll jump into it and enjoy it. I can enjoy improv too. As camp continued, my workshops with Armando Diaz, Carla Cackowski, and Rick Andrews all taught different skills, but they all imprinted on me similar lessons about not stressing myself out and enjoying the journey. This is what makes Camp Improv Utopia an incredible experience, and I felt supported by not just its teachers, but also its staff, fellow campers, and even the lake. I was so nervous about returning to camp, but as it turned out camp was just what I needed.

Since returning from camp, I started getting involved in the Atlanta improv community, so the next 12 months should be different from the last 12. Regardless, I will return to camp. 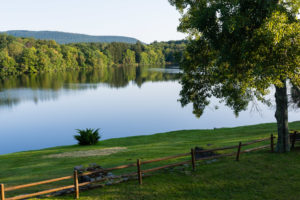